Once upon a time, in an average-sized pond near a grand castle, there lived a beautiful frog.  Because she was so pretty, everyone called her Anita Bonita.  She had smooth light-brown skin with bright yellow spots; her eyes were green, large and expressive with long and curly eyelashes.  Her little hands and feet were delicate and webbed.  And with all of her heart, for all of her life, this little frog had wanted only one thing, one grand and wonderful thing that everyone told her was impossible.

What was it she wanted?  Our little frog yearned to play the guitar.  Yes, I know perfectly what you’re thinking – a frog, playing the guitar?  But you see, she couldn’t stop thinking about the beautiful music that came from that instrument.  From the castle, she had heard its music, and it had affected her deeply.

One day, when her friend the pig was drinking water from her pond, the little frog convinced him to go with her to the castle.  And off they went, Anita hopping while the pig walked, and soon they arrived at the entrance of a large salon.  They sat down there, where she could listen to the sweet sounds of the guitar.  Through the open window,

Anita could see that to make the music, the guitarist used all the fingers of both hands, running up and down the fret board with one while he plucked the strings with the other, thus giving voice to the guitar.  She was more enchanted than ever by the music, and promised herself that one day, she would learn to play.  She would!

“Oh, how I wish I had longer, more agile fingers!” she lamented to her friend the pig.  “I’ll never be able to play the guitar with fingers as short as mine are.”  And she started to cry.

“Don’t you worry, my friend,” responded the pig.  Using his snout he gently dried her tears as best he could.  “My mother always told me that you can do anything, anything!  You just have to really want it, and to work hard to get it.  Look, tomorrow will be better than today, you’ll see.  Think about it, and I know you can find a way to do this.”

That night, the little frog went to bed thinking about what her friend the pig had told her.  She thought about her small, webbed hands, wishing she could change them.  She slept on her lily-pad, and in her dreams she had long fingers and made angelic music on the guitar.

Morning came.  Anita got up, washed in the pond and ate breakfast.  Meanwhile, she was forming a plan.  She decided to return to the castle and ask for guitar lessons from the musician.  In exchange, she would offer him lessons in jumping very high; it was the only thing she could teach someone.

“Hello, Friend Pig,” she said to the hog.  “Good morning to you!  Would you like to go with me to the castle this beautiful morning?  I’m going to ask for guitar lessons.”

“Oh Anita Bonita, I’m sorry!” said the pig.  “This morning, no, I can’t go.  I have to wallow and take a mud bath, and then I have to go hunting truffles and other mushrooms with the cook from the castle.  You’ll have to go by yourself.”

So setting off alone, Anita Bonita jumped and jumped and jumped toward the castle.  She jumped and jumped, until she got to the porch of the giant salon.  The window was open, and inside, the musician was playing the guitar.  One more enormous jump, through the window, and the she landed on the marble floor.

“I beg your pardon, Mr. Musician.  Good Morning!” said the frog, and she curtsied.

The guitarist, surprised, stopped playing his instrument and looked down at the little frog.  “Who are you?” he asked.  “And what are you doing here?  Everyone knows that frogs should be in the ponds and rivers”.

“My name is Anita Bonita”, answered the frog.  “And yes, I live in the pond outside this castle, in that meadow”.  She curtsied again.

Amused, the musician smiled.  “My name is Raymond.  You are really pretty, Anita, and you show me that you have good manners.  But you don’t need to curtsy to me.  I’m not royalty, but only the musician and jester here.  But, tell me – why are you visiting me?”

“Well, Sir,” confessed the little frog, embarrassed, “I thought you were a Prince because you wear a crown.  And I’m here because the music from your guitar is enchanting, and I want to learn to play.”

And the musician laughed out loud.  “You think this is a crown?”  He touched the hat.  “No, Anita, this isn’t a crown.”  He smiled at her.  “It’s just a fool’s cap that I wear.  Look, I work here as a buffoon, a jester.  But still, I’ve decided that I like you.  You are brave – I know this because you have come here all by yourself and have asked for a great thing.  And for that, I am going to teach you to play the guitar.

The frog almost danced in her joy.  “Thank you!  Thank you!  In exchange, what can I do for you?” she asked.  “I can teach you how to jump very high, if you want.”

“No, you don’t have to teach me to jump, Anita.  I already know how to do that.  The lessons will be a gift for you.  And in return, we will be friends.  When would you like to begin?”

And the new friends agreed to commence the lessons that very day.  There was one difficulty, however.  The poor little frog could not put her webbed hands around the fret board of the guitar, which was much too big for her.

“This won’t be a problem, my friend,” observed the musician.  “I have, in a trunk somewhere, a smaller guitar.  I’ll look for it, and give it to you tomorrow.  Come here at two o’clock in the afternoon, and we’ll continue the lesson.”

“Thank you,” said the little frog.  And jumping on his shoulder, she gave him a kiss on his cheek.

In that moment, it seemed that the whole world changed.  The fools cap fell to the floor, and became a real crown of gold and gems; the musician’s clothing suddenly was too big for the man to wear.  But the biggest change occurred in the musician himself, who instantly became a handsome red frog.  And the crown of gold, all by itself, came to rest on the head of the new frog, because Raymond, you see, was King of the Frogs.

The little frog Anita, of course, was astonished.  She curtsied to Raymond, and then remained on her knees.

“Anita… thank you, thank you!  I thank you from my soul,” murmured the red frog, taking the hand of the little frog and lifting her to her feet.

“But, what happened?” asked the little frog.   “Who are you?  And where is the guitarist?”

“I am he,” answered the red frog.  “But first and foremost, I am a frog; this is my natural form.  Do you know that you have broken the spell of a witch, and have given me my liberty?  I could not possibly repay you for such an incredible favor as this!”

“You don’t have to pay me anything,” said Anita.  And then she began to cry, the tears running from her eyes and shining in her long eyelashes.

“Why are you crying?” asked Raymond.

“Well, yes, and I celebrate that too,” responded Anita.  “But now, you can’t teach me to play the guitar.”  And she sobbed, her whole body trembling.

“Don’t cry, don’t cry”, begged Raymond, pointing with one finger at something on the floor.  “Look at my guitar!”

Anita looked at the guitar, which had become a very small instrument indeed, just the perfect size for a frog.  “You can teach me!” she exclaimed, and smiled a brilliant smile.

And Raymond did teach her to play, easily, because she was talented.  They fell in love and were married, and lived happily ever after as King and Queen of the Frogs.  And ever since then, if you visit the pond near the castle at night, and you listen carefully with your heart, you can hear the beautiful music of a small guitar, a romantic song of two frogs in love. 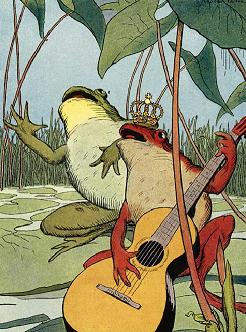